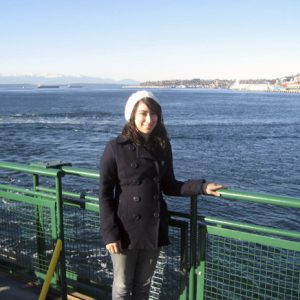 I think I’ve given up on doing this regularly…I’m too much of a slacker! Anywho…this is a picture of me from our vacation in Seattle last Christmas. I’m on a ferry going to Bainbridge Island.

I feel like the weekend flew by too quickly. On Saturday I went my friend’s son’s 1-year birthday party (There’s probably a much simpler way to word that). It was a fun time, and hopefully he likes the clothes I got him =P On Sunday I went to DSW to try and find boots. I didn’t have to look too hard as there were wayyy too many options. I tried on 4 pairs before finding the ones I wanted, which are these. I had a $10 off coupon and a $5 off coupon so I saved a bunch on them as well! Then I went to Kohl’s to look for a new bag, since the one I use everyday is getting holes in the bottom. I wasn’t completely in love with the one I ended up getting, but its starting to grow on me and I really like it now. Only issue I have with it is that, when I have it on my shoulder, the zipper opening is in the back instead of the front…so its much harder to open up quickly without doing some crazy arm twisting. lol

Half our office is sick today. Hopefully I don’t come down with anything. Overall, I’d say I have a pretty strong immune system…which has most likely built up from being the opposite of a germaphobe. haha