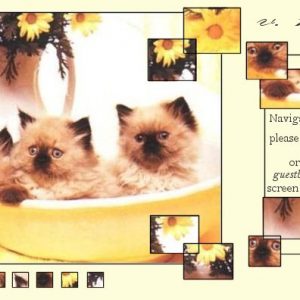 Er…well a “hobby” of mine would be the same thing that I put as my talent probably (music) haha, so I guess I’ll say “web-designing”, if you could consider that a hobby. I suppose so. I’ve been making websites since I was 14…although back then it was obviously very basic geocities-hosted stuff (aah geocities). The oldest “design” of mine I have saved on my computer is from 2002 when I was 15 (below). It has…uh…lots of kittens and squares. 😕 Dreamlight was my first personal website (used to be hosted by Sara!) and before that, I had a couple X-Files fan-sites. I bought my current domain in 2006 I think.

Went to the Temple Homecoming game yesterday. It was fun to see some people that I haven’t seen in forever. The band was good and the football team won (barely)!

Its hard to believe its already mid-October. I still don’t have any Halloween plans 🙁 Though I have a couple costumes. It was super warm out today for October…c’mon Fall weather, where are you?