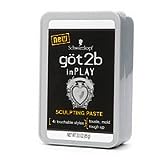 This is my first review for BzzAgent! The product I was sent by them to try was the got2b Sculpting Paste (I also received samples of the hair gel as well). Being that this product is mainly targeted towards men or women with short hair, I decided to use it on my boyfriend’s hair instead of mine. The texture of the product was, as the name suggests, definitely a paste. The consistency was super thick, and I actually had trouble getting it out of the larger jar so I had to use the smaller sample size in the packet, which seemed more pliable. I’m not sure if the product sold in stores is a little softer, but I’m assuming that it is and that the sample I got had just been sitting out a bit too long. All I did to apply it was put a small amount on my hands and applied it to his hair while it was still damp. His hair is fairly short, so I didn’t need too much…but since there was so much in the sample size I probably ended up applying more than I needed to. I didn’t “sculpt” his hair into anything crazy, just used the paste to give the style he already had some more texture and that “gelled” appearance. The real testament to the product, of course, is what he actually thought of it. Turns out he liked it quite a lot! He said his hair looked really good and, since I applied it the night before he said that, I’m assuming it  held well throughout the day. Both of us liked the smell as well. While I wouldn’t say there is anything “special” about this product as compared to other hair gels, it was still a good product for a super cheap price.