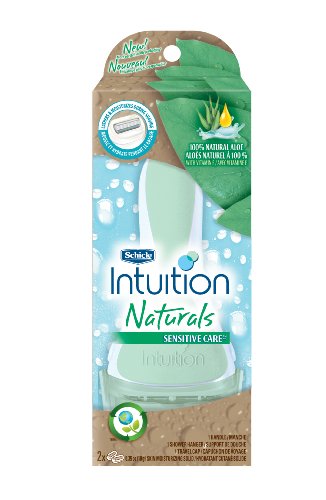 Just a quick review for you today. I haven’t used this razor in a few weeks (and I’ll get into why) but I thought I’d review it in case anyone was thinking about picking it up!

I usually use either the Venus disposables or the Schick disposables, but I decided to try this razor because I thought it would be more cost-effective than buying disposables and I wanted a razor with a more sturdy handle. Well, unfortunately it was the opposite of cost-effective! The razor itself was nice…the design on it was very pretty and it comes with a hook that you can attach to the shower wall to store it. The handle is great and I loved using it because of that. I even got a fairly close shave with it despite the shave bar, which I found surprising.

Unfortunately, the main issue with this razor (and I assume any other razor with a shaving cream bar attached) is that the bar disappears SO quickly. Once you use it a few times, the moisture bar on the front is almost gone, while the rest of it is still there. Once the bar is gone, the razor is very cumbersome to use. I thought I would still be able to use it minus the bar (just like a regular razor) but it was very difficult since there is no other moisture strip attached to it and didn’t glide very well on my legs. So pretty much after the moisture bar is gone, the razor needs to be replaced…and they aren’t cheap to replace so its definitely not cost effective!

I do know that some people like the Schick Intuition (based on some reviews I’ve read), but I really can’t recommend it. If they found a way to make the moisture bar last long, it would be great. For now I’ll stick to my Venus disposables!