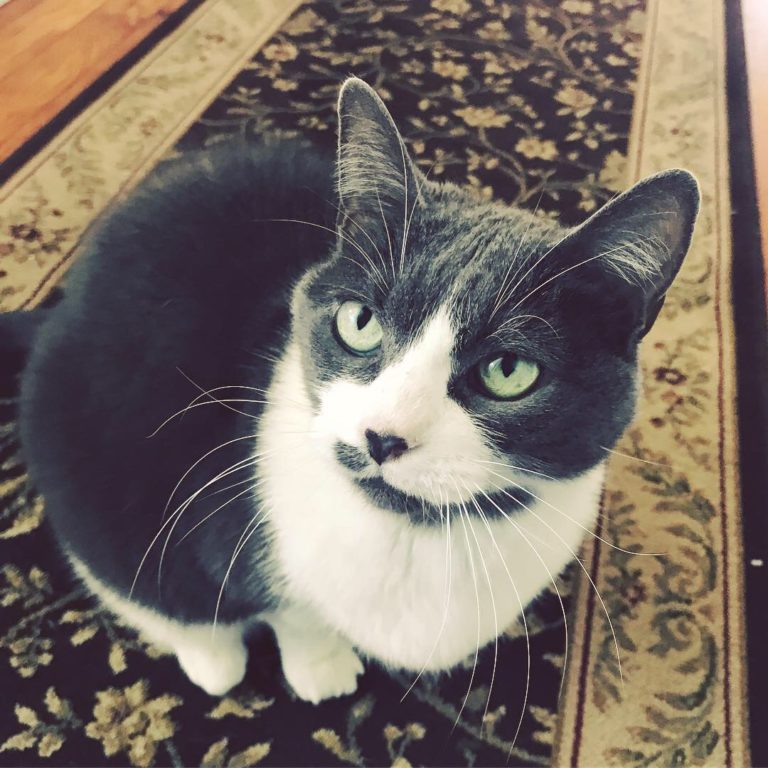 Hello friends! Its been a hot minute. I guess I’m due for some updates…

We are now a two cat household as of a few weeks ago. Our new resident is Misty, an older lady (maybe 12 ish?) who used to be Steve’s mom’s cat. She’s both sweet and hissy, sometimes at the same time. She’s a little weirdo and can be kind of shy but I love her. She also doesn’t meow…just does this sort of silent breathy thing or squeaks when she’s about to get food, which is kind of adorable. And girlfriend loves food. I’m not used to that since Jesse is pretty ambivalent about the whole eating thing. Which means she eats his food also so I need to figure out a solution for that especially since Jesse has lost weight the past few months. I’m not sure if they’re getting along or just tolerating one another. Probably more of a tolerating type of arrangement. For the most part, they stay out of each other’s way, but sometimes Jesse goes right up to her face (not in a aggressive way…more so curious?) and she’ll swipe at him. She was previously declawed so luckily doesn’t do any damage to him. I think they’ll get along better with more time, but for now I’m just thankful that there aren’t any major fights.

Speaking of Jesse…we took him for his annual checkup this past weekend. Apparently he lost a pound over the course of 6 months which is not a great sign. The Dr we saw was concerned about that, especially combined with the biweekly vomiting which he’s done since forever. He ran a bunch of tests including one that detected congestive heart failure (!!) and thankfully, those came back looking good (just a slightly low blood platelet count which may have had to do with the sample itself getting tainted, so they’re going to retest next month). As for the vomiting, we’re going to start him on a prescription sensitive stomach food first and then if that doesn’t work, a different food for food allergies. He also has his dental next month and will need more teeth pulled. I know his mouth has been hurting him for the past few months and I feel terrible 🙁 I really wish they would pull all his teeth at once, but I guess they prefer to spread it out. I think they’re going to pull about 4 this time around. Luckily I scheduled it for President’s Day and I have off so at least I’ll be closeby if they need me.

I still need to post my Book of the Month reviews for January. I’ll get on that! Probably will be up next week sometime. If you’re wondering where my Hungry Harvest posts have gone, I’ve decided to do away with Hungry Harvest for now. The last box I received was pretty mediocre, with a super bruised eggplant and some inedible apples. While customer service was great about crediting my account, I just got tired of playing $19 for Russian roulette of veggies/fruits. I also found that I (still) am really not a fruit person and would have just preferred all veggies, but that option costed more. So I’m back to picking out veggies at the grocery store, but I’m trying to work in more kinds that HH had introduced me to like eggplant and squash. 🙂

I’m probably going to update this blog theme to something else soon because I’m getting a bit bored with it, and I miss using Genesis themes. I’ll probably go for a more simple black and white logo. I’ve felt very un-creative lately. Even with work stuff…I internally groan every time I have to do a marketing flyer. Which is kind of not good being that its my main selling point here. I guess its good, at least, that I don’t have the design gig anymore because I could not even imagine having to start up a client project right now. Do I even remember how to code? *internal panic*

Anyway, that’s all I got for now. I never know how to end these posts…bye?