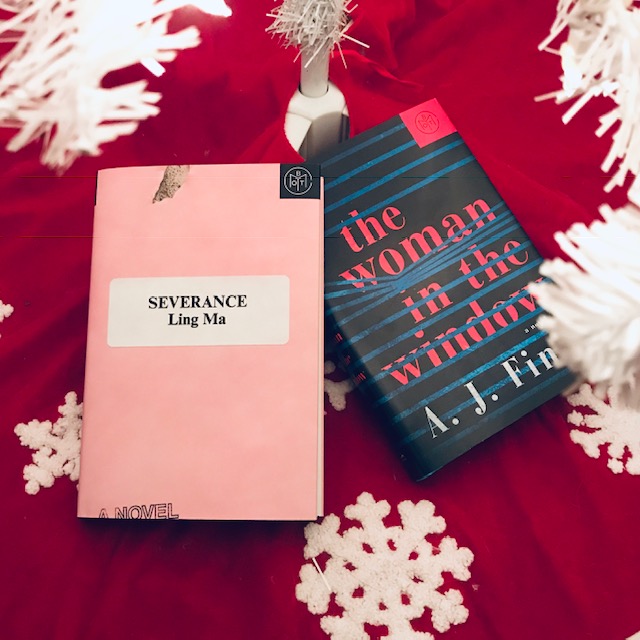 Merry Christmas! This wraps up my books for 2018. I surpassed my reading challenge by 1 book. Yay! This is definitely the most books I’ve read in awhile. Since I’ve moved and take the train, its so much easier to read everyday whereas before I would have to remember to at night. Even now I’ve found myself reading at night in addition to on the train because I haven’t been able to put some of these down. Next year I’m setting a goal of 24 books (2 a month) but I have a feeling I may surpass that.

The Woman in the Window by A.J. Finn

This book is one of the most highly rated thrillers of 2018, so I just had to read it before the year was over! It follow a former child psychologist named Anna Fox who has spent the last 10 months alone in her house, unable to leave due to her agoraphobia. She spends her days drinking (a lot) of wine and spying on her neighbors. One day she witnesses a murder across the street, but its unclear whether it actually happened due to her unreliable narration. The present day story also meshes with chapters about her past and the traumatic events that led to her agoraphobia. I really loved this book and definitely can see why it got so much praise! That being said, I wouldn’t say the final twist is a huge shocking surprise that wowed me or anything. That doesn’t mean it wasn’t good, though! I just read too many thrillers. I would say this book (the way its written, the narrator, etc) are a lot like Gone Girl, so if you liked that book you’ll love this. I’m excited to see the film adaptation of this coming out next year!

This is a very millennial book, down to the “millennial pink” cover. I won’t lie, I love the cover art and it played a part in my decision to purchase it. That and the fact that this is getting a good amount of hype in a lot of blogs and such. As I was reading this, I couldn’t decide quite how I felt about it, but once it got to the end it really made an impact on me (hence my slightly longer review). The book is narrated by Candace Chen, a 20-something office drone working in New York City which, along with the rest of the world, is currently going through a zombie-like epidemic. I was expecting your typical zombie narrative, but Severance approaches this very differently. The “fevered” (zombies) don’t seek out to hurt or bite others. They basically just continue doing their daily tasks over and over without thinking as they deteriorate – which I feel is the main point of this story – we’re basically all just zombies. The book alternates through 2 different timelines, the first taking place post apocalypse with her as a member of a group of other survivors with a very controlling cult-like leader. The other is the days leading up to the apocalypse, and also some chapters about her childhood and parents. While the chapters about her childhood were interesting, I didn’t find them super relevant and could have probably done without them. My favorite parts of this were towards the end of the book as the 2 timelines came closer together. Candace basically continues to go to her office to work everyday, despite the world crumbling around her. At one point the elevator in her building breaks down and she calls the city services to get them to fix it, and the woman on the phone asks why she is even still working since literally no one else in the city is. She doesn’t really understand the magnitude of what’s going on, and wants to continue her routine at all costs. There were so many instances where I could relate to Candace and her complete resistance to change – I think many people could. One thing I think could be improved would be a clearer understanding of what causes people to become fevered. It definitely touched on the topic and you kind of have a general idea of how, but I wish it were a little more plainly stated. Overall though, this was a unique and thought-provoking and a great choice for the year’s end!