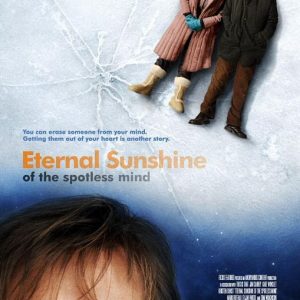 Luckily, this one isn’t too difficult. My favorite movie would be “Eternal Sunshine of the Spotless Mind”. There are a few others that come pretty close as well (I’ll talk about them below)…but this one has always been my fav. A lot of people get confused by it I guess, which is one of the things I love about it. Its a psychological movie combined with a romantic comedy. Now usually I’m not one for the “love story” movies. I surely don’t hide my distaste for “The Notebook”, and I only like romantic comedies that are actually funny (for example, “The Proposal”). What I like about Eternal Sunshine, though, is that the “love story” aspect is actually realistic in that there’s no idealistic happy ending. (spoiler alert?) In the end, Joel and Clementine end up semi-back together anyhow, knowing very well that they will continue to drive each other nuts like they have in the past, but not really caring. Generally speaking, the movie is about not being able to change the past despite erasing it. Almost everyone in the story is given the option of erasing bad decisions and starting over, but end up doing the same things they did before anyway without a second thought.

As far as my general taste in movies ago, I’m definitely attracted to psychological thrillers (e.g “Donnie Darko”, “Memento”, “Vanilla Sky”, or the more recent “Inception”). I like those confusing mind-bending ones where you have no idea whats going on till the end (or even after you finish the entire thing, which was the case when I watched “Mulholland Drive” haha). I also love musical-movies (“Across the Universe”, “Mamma Mia”, “Rent”)…because, well, music is awesome. Does it really need an explanation? lol. I also like a bunch of movies that don’t fit into those categories, but I won’t go on naming them all. Except for maybe “Little Miss Sunshine”, because that deserves a mention. 🙂

So I ended up ordering “The Girl Who Kicked the Hornet’s Nest” last night off Amazon because I finished “This Is Where I Leave You” in Charlotte. It was a good book by the way. Very quick and entertaining read…I’d suggest it. Get this though…I only paid around $11 for the hardcover (originally $27) and I got free 2 day shipping with my free trial of Amazon Prime, which ended up being 1-day shipping because its supposed to be delivered today. Is Amazon awesome, or what? Apparently I need to get books through there more often. And basically everything else.