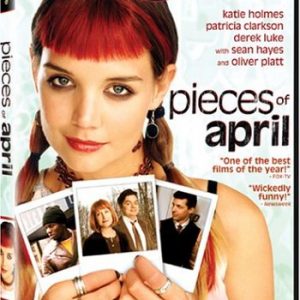 Last day of the meme!…which means I’ll actually have to think about what topics to post from now on. haha.

In the spirit of Thanksgiving which is coming up this Thursday, I’ll talk about a movie that I like which centers around Thanksgiving called “Pieces of April”. Its a little indie comedy/drama about a girl, April (Katie Holmes), who invites her dysfunctional family over to her little apartment for Thanksgiving dinner and to introduce them to her boyfriend. Her oven ends up breaking, so she asks her neighbors in her building if she could use their ovens for 15 mins each to cook the turkey, whereby she learns more about them and their families etc. Its a cute little movie…not exceptionally funny or anything, but I watch it every Thanksgiving for some reason. I like April’s character, because she doesn’t really have the first clue about how to cook let alone how to prepare an entire Thanksgiving dinner…which I think would be kind of fun to do myself, but would probably end up being as clueless as April is. haha. You can watch the full movie for free over at Hulu. I’m not sure why it isn’t on Netflix streaming though. I feel like whatever is on Hulu streaming should be on Netflix streaming considering people actually pay money for that. I guess its a matter production companies choosing to sell rights to one website but not another. Who knows.

Speaking of Netflix, they have raised the prices (starting in January) for all of their packages. The “one DVD at-a-time” package will be $10 instead of $9, and so on. Whats awesome, however, is that they’ve added a “streaming only” package (which is $8). I signed up for it immediately! As much as a like watching DVDs occasionally, I almost always just stream whatever movies they have online. The last DVD I got (which I haven’t even watched) has been sitting on my TV stand for the past 3 months haha. Unfortunately, a lot of their streaming movie options tend to be kind of lame…like straight-to-DVD movies or really old movies, but they do tend to have a lot of recent documentaries as well as foreign films.

One more day till Thanksgiving break 🙂 (saying the word “break” makes me sound like I’m back in school haha). Do you guys do the whole Black Friday thing? I usually don’t. I think I only did it once when I was in highschool or something. I love Cyber Monday though and plan to take advantage of some deals if I find them. I already know what I’m going to get the boyfriend, though I can’t post it here obviously :p

Hope everyone has a lovely holiday! (if you celebrate it, of course)