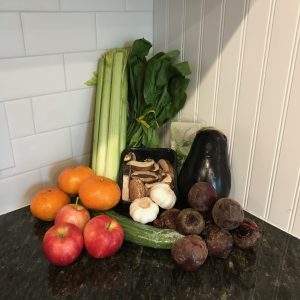 If you’re interested in signing up for Hungry Harvest, here is my affiliate link which will get you $5 off your first order 🙂

Not a bad box but so many beets. Steve said the apples from this box weren’t great (I think he threw them out), though they looked fine to me on the outside at least. The oranges were delicious, but kind of wrecked my teeth cause my teeth are very sensitive to citrus.

So instead of making a salad this week, I decided to make this beet hummus and use the other veggies I got for dipping (along with some crackers). It was…okay. I didn’t really care for it. It was too sour and I had to add sugar to it. It might have been user error, though, because I used a 15oz can of chickpeas (the recipe didn’t specify the size), but I think it was supposed to be a larger size can. So it probably had too much lemon juice in it. Beets are SO healthy, though, so at least theres that! I also bought a mandolin with the intention of making beet chips with the remaining 2 beets, but I haven’t gotten around to it yet.

OMG. This was SO good. I am definitely making eggplant parm more often! It was a little bit involved but not too difficult. I was worried I wasn’t going to have enough eggplant since all the recipes I looked at were calling for 3 eggplants, but 1 was perfectly fine for the 2 of us (with a little left over). I chose to “sweat” the eggplant the night before which basically consists of salting it heavily, leaving for at least an hour, and rinsing it off after. A good amount of liquid drains from it which makes it less bitter. For the marinara sauce, I used this recipe and it was delicious and super simple. The leftovers were even better!

Mmm pasta! This was also delicious, and pretty simple to make too. I ended up adding a little bit of butter and some of the mushrooms as well, which it didn’t call for. It never ceases to amaze me how much spinach wilts in hot liquid. I used all the HH spinach and didn’t think it would fit in the pot…as you can see, its basically gone and blended into the pasta really well. Unfortunately I mostly ran out of Parmesan cheese from making the eggplant parm, so I ended up using some shredded cheddar which worked out really well.