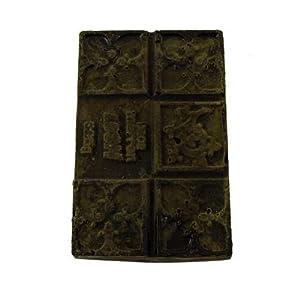 I’ve been wanting to color my hair black for so long now, but I was really hesitant to use chemical dye or to pay a ton to get it done at a salon. After looking through tons of reviews, I figured I would give Lush’s henna a shot. I’m having issues with gray hairs lately…they’re really noticeable and there seems to be more and more of them coming in. I wanted to make sure that the henna dye would be able to cover them, or at least mask them somewhat. I went to Lush and chose the darkest color henna they have, which is called Caca Noir.

Preparing and applying the henna was definitely no easy task. The sales associate at Lush told me to use the whole block for my hair, since it is fairly long, but I chose to use half of it (3 blocks). I just didn’t want to waste the whole thing in one go! I grated half the block with a cheese grater (make sure its not one you really want to use again) in a large bowl and added some freshly brewed coffee. I stirred it together until it was the consistency of batter. I also added a little bit of olive oil. Looking back, I should have probably added a bit more coffee to make it a little less thick because it was pretty difficult to apply. I had to lay down a ton of newspaper and towels on my floor to keep the henna from getting over anything. Applying it was a huge mess…chunks of henna were flying everywhere! And the smell is pretty terrible. I had just enough for my hair, so 3 blocks is probably the best amount for me. After applying it, I wrapped my hair in saran wrap and then again in a towel. It can be left on anywhere from 2 hours to overnight. I chose to leave it on all night, and put an old pillowcase on my pillow to avoid mess. I left it on for about 9 hours and washed it off in the morning. Rinsing it out wasn’t too bad. Its a very odd feeling though because its so gritty, and my tub stained a little. I probably shouldn’t have shampooed it right away, but I did. I had to go to work the next day so I didn’t want my hair being too greasy. I was really surprised when I saw the color! I wasn’t expecting to even notice a change since my hair is so dark and I didn’t think I applied it right, but I saw right away that it was a shade darker…a shiny black! Most of the grays I had are gone, and the few that I could see were darkened and blended with my hair nicely. My hair is also extremely soft and shiny, although very greasy because of the shea that is included in the henna. I will probably need to shampoo it once more before going to work. Here is a before and after picture:

Overall, I’m very pleased with Lush’s henna and am definitely going to use it again! I wish the process weren’t so messy, but I’m willing to deal with it to get these results and to avoid chemical dye. In the future, I think I will make sure to use it on Friday night so I have a longer amount of time to wash it and get the smell out, which lingers a bit. I’d highly suggest this! Let me know if you have any questions =)