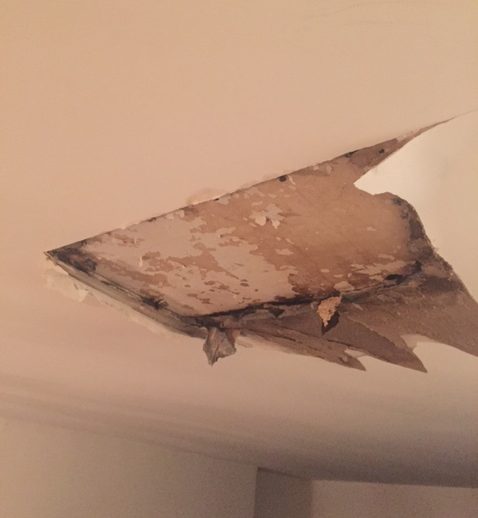 Nothing too exciting going on. Apparently my shower is leaking into the girl below me’s apartment (who I refer to as “Melanie 2” or the “other” Melanie cause we have the same name). Hopefully that gets resolved today so I can use the shower again. There’s supposed to be contractors coming over to try and find the source of the leak. I’m always so paranoid about people being in there with Jesse there. I always put up a sign to remind them to keep the door closed so he doesn’t get out.

That reminds me that I never told the story here about my ceiling collapse last summer (since I haven’t posted in like a year). Might as well since I have nothing much to talk about. So last August, I noticed there seemed to be some fresh water stains on the ceiling above my loft area. I called the Landlord who said it was most likely the apartment above me’s A/C unit pipe that needed to be cleared out. They called someone over to do that, and all seemed to be well for a couple days until around 12AM one night I hear this dripping sound and realize there’s water dripping from the ceiling into the loft. I put a trashcan under the drip, and figure I’ll call the Landlord first thing in the morning. I didn’t want to bother the girl since it was so late and, if you know me, you know I have terrible social anxiety so the thought of knocking on her door alone scared me. Well I ended up being up ALL night due to this loud dripping sound. I noticed that the ceiling was kind of bowed downward (FYI…if you ever have a leak and notice that, poke holes in your ceiling right away). I didn’t poke holes in my ceiling (I just didn’t know what to do and, ironically, was worried about damaging the owner’s property) and the result of that happened around 5AM when the the damn ceiling collapsed. It scared the hell out of poor Jesse (and me obviously). The only good part about it was that it reduced the amount of leaking a bit because there wasn’t so much water pooled up. Here’s a picture of that damage…

So yea…that was a fun sleepless night. I ended up taking off work the next day. The maintenance staff came by and discovered it was due to the apartment above me’s A/C (the condensation pipe was never properly put back into place). Literally took 2 minutes to fix. I think they ended up trying to get an insurance payment from the company that originally repaired it since they were the ones who didn’t properly put the pipe back in place. I’m not sure what ever came of that. About a week later, they came by and repaired my ceiling and all was well. I’m hoping Melanie 2’s leak isn’t as bad as the one I had…I’d feel terrible (even though it isn’t my fault haha).

Well that all for now. I’m expecting an Ellie box this week so I’ll do a post about that at some point.