Can’t believe I’m moving in just 4 days. Crazy! I’ve gotten pretty much everything I need from IKEA (couch, desk, tables, etc) so its going to just be a matter of moving it all and putting it together. I’m a little worried about parking since there is none and its a one-way street, but hopefully it’ll work out.

I’ve been incredibly off lately, like the past week or so. I’ve been like “about to fall over” level fatigued in combination with random anxiety attacks, neither which seem to have a cause that I’m consciously aware of. I don’t know if I’m stressed about the move (although there really isn’t much to be stressed about) or if the fact that my life is somewhat drastically changing is finally hitting me. The other day we had a group lunch in the office, and I started getting crazy anxious during it for no real reason. I mean I usually feel anxious in those settings, but it lasted for like hours afterwards…my heart literally wouldn’t stop racing until I finally distracted myself by working on something. It also happened like randomly in the middle of the night last week…woke up with my heart racing and couldn’t go back to sleep. And today I’m absolutely exhausted despite sleeping pretty decent last night. And a bad headache to boot. WTFX, body? Get it together!

In GOOD news though…remember that ear infection I had (with subsequent eardrum perforations)? Went to the doctor for a followup last Monday and its all healed. Yay! Such a relief knowing that I won’t have to have surgery or anything or have to worry about that during my move.

A week after I move in, I’m going to the shelter to pick out a new kitty. I’m super excited! In the meantime, I’ve been enjoying the 2 little kittens Shawn has adopted (Ducky and Owl). I think they know I’m leaving soon because they’ve been wayy cuddly with me lately. haha. Here they are… 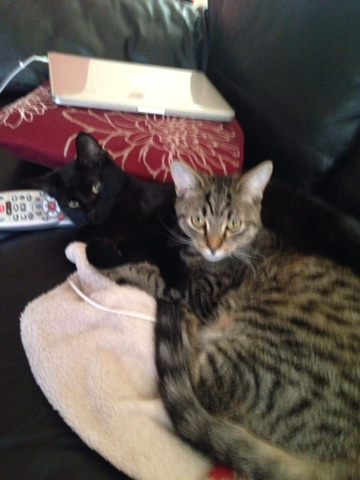 Aren’t they the cutest? 🙂