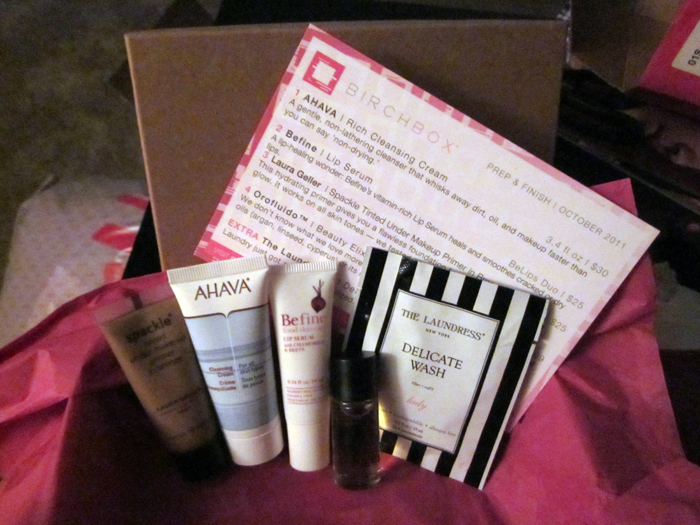 So when I opened my birchbox this month I had no idea what would be in it…usually it comes a little later, so I spoil it and look up what other people got. This time it came really early though so it was a total surprise. Here is what I ended up getting:

[/amazon_link] Laura Gellar Spackle Under Make-up Primer in Bronze I was both excited and a little worried to receive this primer. I love the Laura Gellar brand, but I usually stay clear of anything with the word “bronze” in it. While my skin is already tan, I don’t want it to get tanner! However, the tint of this is very subtle and blends into my skin really well. [amazon_link id=”B004UQH2BU” target=”_blank” container=”” container_class=”” ]

[/amazon_link] AHAVA Cream Cleanser I really dislike getting cleansers or moisturizers or anything like that because I know I won’t use them regularly (I’m liking my skincare routine right now and don’t want to mess it up). I’ll be putting this in my travel bag for the next time I travel and need a little cleanser to take with me. [amazon_link id=”B004HIBLNQ” target=”_blank” container=”” container_class=”” ]

[/amazon_link] Orofluido Beauty Elixir I honestly had no idea what this was when I first picked it up. I thought it was going to be some kind of face oil, which would have been disappointing…but turns out its a hair oil. I have only used this once but its really nice, and it smells great!

BeFine Lip Serum This reminded me a bit of the jouer lip serum from last month’s box except not as thick…but much much larger! (does anyone know if this is full size?) I do really like this…it feels really smooth on my lips and gives them a good amount of shine.

[/amazon_link] EXTRA: The Laundress Delicate Wash Kind of disappointed that the extra is laundry detergent, but considering that September and August’s “extras” were essentially pieces of string with different degrees of elasticity, I think I’ll take it! I just bought a nice cashmere sweater from Express that I need to hand wash, so I’ll be using this.

Overall, I think its a better box that last month’s, although I’m not super impressed with the products I got since I won’t really be using the cleanser. I’ll have better reviews coming up later this week once I’ve tried the products a bit more.

What did you guys get in your October boxes?