Went to mall, movies, and out to dinner on Saturday, which is always a good combo! We saw Battleship, and it was actually pretty good despite being a bit campy. It was very fast-paced (and very loud actually…lots of explosions). I could have probably done without the large group of 7-year olds that someone decided to bring along (I guess it was a birthday party or something), but they weren’t too talkative so that was good. After the movie we went to the mall and I checked out New York and Company for some work clothes. I picked up a couple button down shirts and a black cardigan. Then we went to PF Chang’s for dinner. I had pork dumplings, vegetable lo mein, and a mini cheesecake for dessert. Yum!

Sunday was uneventful and mostly consisted of complaining about the fact that it was Sunday, which is pretty much what usually happens.

Luckily I have off next Monday for Memorial Day! woo! I have no plans yet but its nice just to have a 3 day weekend…totally looking forward to that even though I know it’ll fly by. I’m hoping to maybe clear out my closet a bit this weekend…put stuff in a giveaway bag that I just don’t wear anymore. We have like 4 trashbags full of clothes that we still need to giveaway sitting in our closet. The donation box down the street from us just vanished, so we’ll have to figure out where to take them now.

O yea…the flies (and general creepy crawlies) are back. Arggh! I hate bugs. SO MUCH. A fly (one of those annoying large buzzy ones) got in over the weekend and I started flipping shit and spraying bug spray everywhere. I’ve been looking in every drugstore for that Raid Bug Barrier that I used last year that was amazing at keeping bugs out (so I wouldn’t have to kill them in the first place). I can’t find it anywhere! I can only find refills. Why would you sell refills but not the actual starter pack? Of course I shouldn’t have thrown away the starter pack anyway…I have no idea when I did that or what I was thinking. If I can’t find it anywhere soon I’ll have to resort to Amazon. 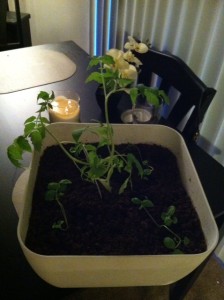 My basil and tomato plants are doing…okay I guess? I still feel like the basil isn’t growing very fast, but the tomato plant is taking over and I need to find something to stake it with so its not falling over everywhere. What I’m using now is too thin and doesn’t hold it…any suggestions? (or do I have to buy something that’s actually made for the purpose of staking cherry tomato plants?)

I’ve been making some progress on the guitar! I’m following the lessons from justinguitar.com…its an awesome site and its probably the most detailed that I’ve found! I’ve learned a few chords already…just need to go back and forth between them faster. The only issue I’ve run into is that my nails are too long. Maybe my nail biting habit will actually proove useful? haha.