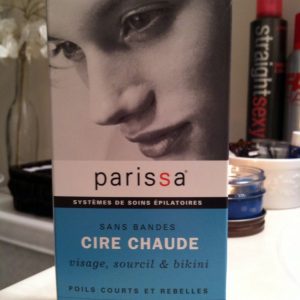 Sorry that I didn’t have a post up yesterday. It was a holiday here, and we also just got new internet installed so it was a bit of a hectic weekend. Today I have a review for you on a hair removal product I’ve been using for about a month now. For a few years, I’ve relied on the wax strips from Sally Hansen (the ones that come with wax already on it that you cut it to the correct shape to use). They’ve worked okay, but they really weren’t great at removing all hair and they didn’t last long at all. Plus, cutting the strips was annoying.

After looking up a bunch of different wax products on drugstore.com, I decided to go with this one by Parissa because it got great reviews and I knew that I wanted a hot wax product as opposed to the pre-waxed strips that I was using (I accidentally photographed the French side of the box, if you’re wondering why none of it is in English lol). Usually, hot wax works much better. Also, this wax was strip-free…just apply and peel off. I was sold! It was also pretty inexpensive (I think I paid around $8 for it).

To use this wax, you unfortunately have to heat it over a stove or on a wax warmer of some sort since the wax is in a metal container which is obviously not microwavable. Luckily, I have a candle warmer so I just put it on there and let it melt. It does take a little while to melt if you’re using this method…about a half hour or so I would say. But I feel like its a better method to use than the stove because it doesn’t get too hot and won’t burn this way. After the wax had almost melted (they tell you to wait until its about halfway melted and then stir it to the right consistency), I used one of the 3 wooden applicators to apply a thick coat of it. I used the wax on my upper lip, eyebrows, and chin. After the wax is on whatever area you want to use it on, you wait about 15 seconds (probably no more than 30) and then quickly pull it off. To my surprise, it grabbed a whole lot of hair (much more than my previous Sally Hansen strips did) and my skin was baby smooth and, for the most part, hair free! No wax, at least in my case, is going to grab every single hair, but it did get 90% of it. The one downside to this product is that its extremely difficult to do you eyebrows. They don’t include a stick that would be an appropriate size for this, so you risk getting it on your actual eyebrow and its super difficult, almost impossible, to remove after that happens. I need to pick up some orange sticks or a small spatula, which should work well at applying the wax to brows.

Other than the difficultly with the brows, I’m extremely pleased with this product and I’d highly suggest it if you’re someone who can’t afford to go to the salon every couple weeks (which is how often I need to use this product). As far as pain is concerned, it hurts as much as any other wax product. If you get waxed regularly (or if you did at all in the past), you should probably know what to expect. If this is your first time waxing, though, then I would expect it to be a little painful and your skin will probably be a little more red than it normally would be. The kit does come with a little vial of azulene oil, which you apply to the waxed spot afterwards to soothe it. For me, the results lasted about a week or a week and a half. The package says “smooth skin for up to 8 weeks” but I pretty much know that won’t be possible with me, and if you have anywhere near the hair that I do (thick and fast-growing) then you know that as well haha. If you’re going to use this wax or any other hot wax product for that matter, make sure to put down a newspaper over the sink (or whatever area you will be using it). I learned the hard way after the first time I did this because it does drip a lot and the wax took a while to get off the surface of my sink.

Do you use a wax or hair removal product regularly? What kind do you use?