So we got Charles’s allergy panel results back this week. He’s highly allergic to dustmites (which I already suspected) as well as a number of trees. I have no idea if the various outdoor things he’s allergic to are even in our area, but I guess they very well could be. Its probably mainly the dustmites. We’ve ordered him the custom allergy injections which should be here in a couple weeks. They’re going to show me a demo of how to do it in the office, and then I’m going to have to give them to him myself (um…scary much??). The test didn’t include food allergies (as testing for that is inaccurate), but I still have a hunch that he’s allergic to chicken so I’ll continue to avoid giving him that.

The Doctor also wants him on oral steroids starting this Monday for 2 weeks. I was a little apprehensive of this, but he’s already starting to scratch again since his depomedrol shot is wearing off, so its probably for the best. Hopefully he wont have as drastic of side effects as he did to the shot (he was extremely lethargic, and is only sort of bouncing back from the side effects now…though he still has very low energy). Luckily, he’s been eating well, although he was sneezing a bunch last night so I’m super worried that he’s developing a cold due to his weakened immune system (because of the steroids). I reallllly hope he doesn’t get sick again, since that would involve another trip to the vet and antibiotics most likely. I’m spending a damn fortune on this little dude! This weekend, I plan on doing some hardcore cleaning to rid the place of dustmites (well, to the best of my ability…they’re impossible to really be rid of). I do try to wash his sleeping stuff in hot water, but I just realized that he’s been using cardboard scratching posts…the same ones for like a year. They’re probably crawling with mites! I’ll be throwing those out and replacing them with sisal ones. I’ve also ordered a mattress encasement for our bed, a new more powerful vacuum, vacuum-seal bags, and special laundry detergent. Huzzah! 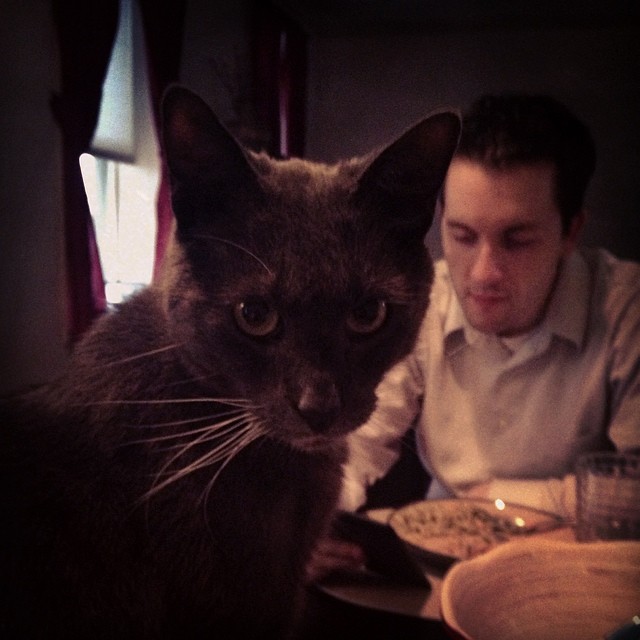 “What do you mean you were planning on spending your paycheck on something other than me?? That’s silly!”

He’s also been sleeping with us this week instead of in his other room where we usually make him sleep. Which means your’s truely hasn’t been sleeping. I’ve been trying earplugs but I don’t know how people sleep in those? Like I feel like it actually creates more noise (my breathing is super loud and I can hear my heart beating really loud whereas without them I can’t hear those). Maybe I just need earplugs that aren’t quite as strong.

This weekend is Memorial Day so I have Monday off. On Saturday, we’re going to my parent’s house for a BBQ and Sunday we’re going to the Phillies game for the afternoon.