…and another January of shit hitting the fan! Though hopefully not as bad as last January? We’ll see. 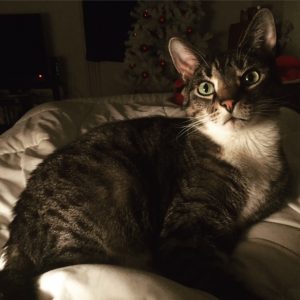 The first week of the year around New Year’s, my kitty started acting a bit funny. Kept going after his tail at every opportunity. He had also been licking litter off the floor for months and vomiting every so often. I decided all of this warranted a vet visit, so I took him in. They did blood work on him and I was positive it would come back showing anemia (licking litter is a common sign of it) but apparently his blood work was perfect (whew!). Unfortunately I still don’t really know what or if anything is wrong with him. He’s still going after his tail (though not as much) and still licks litter off the floor occasionally when he’s hungry and doesn’t want the food I give him. I switched him over from clay to corn litter so that it wouldn’t hurt him if digested, though I still don’t like that he does it. He actually hasn’t vomited in over 2 weeks so *fingers crossed* that the frequency of that is going down. Silly cat. He’s been waking up so early lately (around 330) and driving me nuts…let me sleeeep! And of course I didn’t get his vaccines done while I was there (cause I didn’t want to interfere with whatever he may have had) so now I have to drag him back next month and he does NOT like going there.

Next medical issue has to do with me. I went in for my usual annual visit last week and the Dr said my thyroid gland felt enlarged. I was sure that I probably had hypothyroid (it runs in my family and I’ve had some slight weight gain over the past few months that I can’t explain). She ran bloodwork, but that came back normal (normal bloodwork all around for me and the kitty I guess). I went in today for an ultrasound and my Dr should be calling me tomorrow with those results. I’m hoping that this isn’t serious and I won’t have to go back in for additional appointments.

We also had a pretty big blizzard last week. I’m totally loving the cold snowy weather after all the stupid warm weather we were having! We got over a foot of snow in my area. Wish the blizzard landed on a work day but oh well. I stayed inside all weekend and watched TV and read. 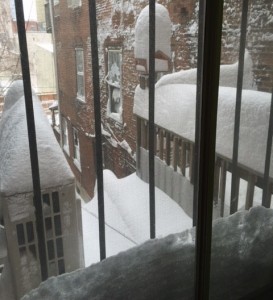