I recently signed up for the subscription box, KitNip, which sends a box each month filled with kitty related goodies. July is the first box I received, and it was decorated so nicely! Its like a Birchbox for kitties 🙂 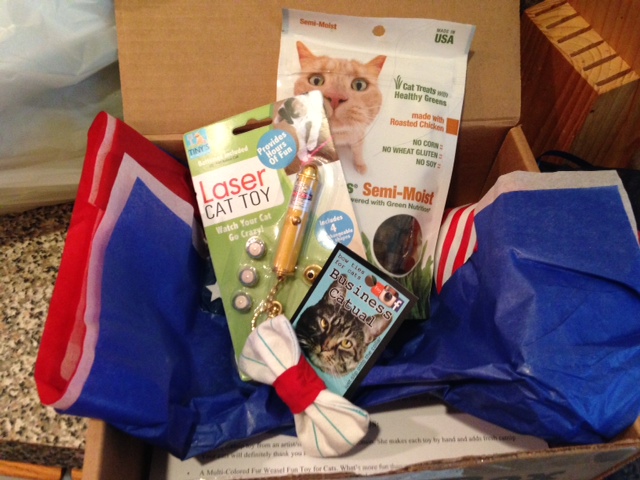 I kind of figured that I would get things that Charles couldn’t use, specifically as far as treats go, because he has a suspected allergy to chicken and that makes up most pet food and treats. Sure enough, there were a bag of treats included that are chicken-based…and its a shame because they look so healthy too! I would give him some to try but I don’t want to risk it. Kitty-owners: who wants these? I will send them to you as I don’t want them to go to waste!

As for what else was included in the box, I got the “Starter” one since its only $9 and I didn’t want to pay anymore for it. The other main item was a laser pointer toy, which unfortunately I already have as well, although this one is kind of cool because it has different shapes. Will definitely use it! Other extras were a little kitty pin and a cute bowtie and I NEED to get Charles to wear somehow for at least enough time to snap a photo haha. Its so cute!

I will have to sample a couple more boxes to see if I will continue a subscription. If there are going to be treats in every box, it may not end up being worth it =/