Good grief I have not posted in almost a month!?

First things first, because I know you love hearing about this little dude: 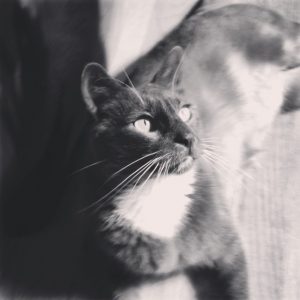 Unfortunately, he is not doing so great. His itchiness has increased tremendously over the past week or so. Poor thing has like no hair at all on his belly (and close to no hair on his legs). I don’t know if its the humidity or the fact that there have been a lot of cardboard boxes around (Shawn is trying to build a computer…and its kind of not working so we’re holding onto the boxes), or the fact that I changed his food and he’s reacting to something in it. Its just so frustrating, especially when he’s grooming all night and keeping us awake. The humidity in our place is really ridiculous though. We’ve had one door jam up and one drawer refuse to open due to the wood swelling up. I was looking into dehumidifiers but they are so expensive. I’m going to try cleaning tonight, even though I already did the big cleaning sweep I do on Sunday.

In other news, Adorability Designs has really been going great. For the first time ever I’m actually completely booked with jobs a month in advance. The downside, though, is that I realized I should really have been paying quarterly taxes…and its already August. I wasn’t really making enough to qualify last year, but now that I’m looking at my numbers I will definitely owe way too much come April. I’m basically going to just send along a lot of the taxes in September…and hope that makes up for not paying anything the first 2 quarters. =/

And somewhat related, I will be releasing a short little ebook about my favorite WordPress plugins sometime soon. I’m not giving a date yet because I have too much shit going on to actually sit down and do it and I know I’m going to procrastinate on it for as long as possible! lol

Some fun vacation-related things…I think I already mentioned that I’ll be going to Seattle in August? Actually its been so long since I’ve blogged that I might not have! The rents and I will be going to Seattle and then driving to Moclips, Oregon for a family reunion for a few days. Should be fun! Shawn and I will not be going on a vacation this year (or at least that’s how its looking), but we have some fun stuff planned for his birthday weekend. I got tickets to see Book of Mormon on his birthday, and then made reservations at the Palomar for the night. Fan-cay! So that’s kind of like mini-vacation I guess.