Wow guys sorry about the slacking with this! I was sick on Monday and Tuesday (and just lazy and tired the other days haha). I’m not sure what exactly I had. I went home sick on Monday with awful body aches that developed into a fever. Took some NyQuil and it was pretty much gone by the morning. I took Tuesday off anyway though because I was still feeling a bit out of it, but by the afternoon I was fine. Weird! 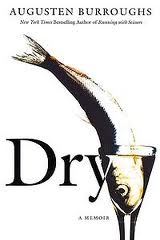 Anyway…non-fiction book. Memoirs are non-fiction, right? Well lets hope so because I don’t actually read any other non-fiction books. haha. My favorite author is Augusten Burroughs…and mostly all his books are memoirs. His most well-known, of course, is “Running With Scissors”, but my personal favorite of his is “Dry: A Memoir”. The book is basically about his struggle with alcoholism, which makes it seem like it would be extremely sad (and at parts, it was), but its actually quite hilarious. I remember reading it on the train when I was working at Temple during the summer and trying not to laugh hysterically. I’d highly suggest reading any of his books (somewhat similar to David Sedaris’s style, if you’ve read anything by him).

Its been raining all week. Bleh. I woke up this morning and it was pouring, so I equipped myself with my huge Hunter rainboots, a hoodie, and jeans only to go outside and find out that, by that point, it was just a drizzle. I swear…every time I wear my rainboots it stops raining. And when I don’t wear them, it pours.

What did you guys think of the last Glee episode? (for those who watch it of course). I’m really not a fan of the music videos. They’ve always seemed too awkward to me and its almost like they film the video first and then try to think of a way to fit it into the storyline. They could have easily found Britney Spears songs that they could have integrated into the plot without all the “fantasy” nonsense…although I will say that I enjoyed “Slave 4 You”. Mainly because Brittany (Heather Morris) is an absolutely amazing dancer…and I daresay better than Miss Spears herself. lol. I also enjoyed seeing John Stamos (who doesn’t enjoy seeing John Stamos?). I wonder if he’ll have any singing parts in future episodes. Also, wtf was up with the last song not being a Britney one? It was obviously a shameless plug to promote the new Paramore song. I’m getting tired of the Rachel ballads ending each episode (and Rachel ballads in general). I miss when they’d close out with the big group number.