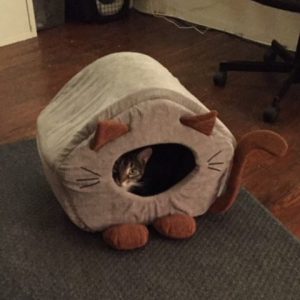 Happy 2018! Hopefully everyone had an enjoyable New Years 🙂 Its been absolutely freezing here lately, so I was only outside to watch fireworks for about 5 minutes before running back inside haha.

2017 was absolutely wonderful. I met an amazing guy (though I guess that was technically 2016), traveled to some fun places, and just had an all-around awesome year that I’m so incredibly thankful for. I’m hoping for more of the same for 2018! I forget if I usually make New Years resolutions. I guess I have here before but never kept them. I don’t have any really for this year either. Now that I’ve officially shuttered my design business as well, I’ll hopefully have less stress too (although I never underestimate my ability to have extreme anxiety over unimportant things…its a superpower, really). Also really looking forward to moving in with my boyfriend in April.

Speaking of cats, Jesse is doing well. He received a couple nice Christmas presents, including a heating pad (from me), a little house bed (from Steve, pictured left), and a new litter box (from my parents). Lucky bugger! I was nervous about the litter box since its the first time I’ve replaced it since I got him, but he took to it right away. I’m also trying different things to see if it’ll prevent his throwing up issue. He actually went a really long stretch in the Fall without throwing up…about 6 weeks. Now its been like every 3 weeks or so, but I feel like its gone down for sure in frequency. I’ve cut out beef (which he might be allergic to but not sure) as well as grains, and am trying to give him filtered water instead of tap. He has his usual yearly appointment for vaccines in February, and then I’m not sure what I’ll do as far as his annual dental goes. I might push it up to March or early April so that my current vet can still do it, since I really like them.

I’ve gotten a couple exciting new things this past month. I finally replaced my old iphone with the iphone 7 (I know, not the newest model but I just can’t justify shelling out for that). I like it so far. I feel like I’ll take much better care of my phone now that I’ve bought it outright instead of renting it from the carrier. I’ve also replaced my beloved Coach purse with this one from Madewell. While I loved the Coach one, it was just always a bit too big, and the handle and sides had started fraying pretty badly. I’m really loving the Madewell one so far. I had to get used to the size since I’m used to having so much extra room, but it really is the perfect size for what I need. I also ordered a matching wallet for it too, because sadly my beloved kitty cat wallet has about reached it’s expiration as well (the plastic on it is cracking, and the inside plastic is barely attached anymore). I’ll still use it for some extra cards that I don’t need quite as often, since I can’t part with it completely.

So I was called for jury duty in a couple weeks, which I’m kind of nervous about. Not the actual jury duty itself, but because I had it exactly 3 years ago and that ended up kicking off one of the worst years of my life. Maybe I’m too superstitious about these kinds of things…its kind of silly really. I’m sure this year will be great. Just keep your fingers crossed I don’t get any crazy ear painful infections again (two in 3 years is more than enough!) or that my cat doesn’t die or get some kind of crazy illness.

I unsubbed from basically all my subscription boxes, so I’m not even sure what to post about here anymore. I do want to do a post about a couple clothing brands I’ve discovered and love, and I guess book reviews which I’ve been seriously slacking on. I have kept up with reading, though, which I’m really proud of (one of the only resolutions/goals I’ve probably ever kept in life LOL). I’ve averaged one book a month from Book of the Month (referral link as I highly recommend!). Right now I’m reading The Chalk Man by C.J. Tudor. Its actually my December book, but I never got a chance to start it since December was a bit crazy. I still got another book for January: As Bright as Heaven by Susan Meissner. It takes place in Philly which is the main reason I was drawn to it. Hoping to finish both books this month.

I’ve also been binging The Crown on Netflix, which has inspired me to start a marathon of British monarchy-related films and/or TV shows in chronological order. I’ve started with The White Queen, a show that aired on Starz a few years back which is about the War of the Roses. I know there’s a couple movies/shows that take place before this time period, but I figured it was a decent place to start since there’s quite a lot after it that should take me up to the present without a ton of gaps (though theres a good 100 year gap in there which I suppose is pretty big…but I just can’t find any films or shows during that time).

That’s all for now! Stay warm!