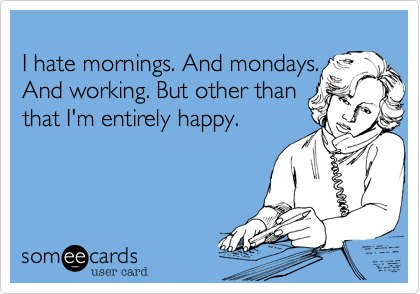 So I’ve decided to try to be more positive this week, and not so incredibly anxious. I kicked it off by making some chamomile tea last night and lighting some nice smelling candles. What’s the first thing that happens? My damn smoke detector (which is so loud you can probably hear it down the street) starts blaring because I guess the candle was positioned too close to it. Its never gone off before, so I wasn’t exactly sure what to do except wave books and hit it with things, which is my preferred method of making scary loud noises stop. Apparently its a decent method because it finally stopped, but not after causing me to have an effing heart attack and I was shaking for a good 15 minutes afterwards. Yay for relaxation! X( And now it keeps randomly blinking red occasionally which its never done before…not sure what to do about it but as long as its quiet then I’m not going near it.

Picked up a couple things for the condo this week…a crock pot (which I’m super excited about using!) and a nice, memory foam rug for the kitchen which is supposed to make standing for awhile more comfortable. This weekend we’re heading to IKEA to finally get a dresser and nightstands (we’ve never had real ones before). I can’t believe how close its getting to settlement. I’m both nervous and excited!

Thanksgiving is on Thursday, so its a short work week for me. Do any of you guys do the Black Friday thing? I never have before. As much as I love shopping, I think I love sleep much more. =p