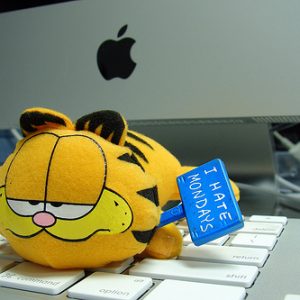 So this weekend didn’t go as great as I was hoping (mostly for reasons I can’t really write about here) but I did end up going to the city on Saturday and getting some stuff done. I didn’t end up going to dinner (being by myself and all X( , which would be lame), but another time I suppose. My Groupon is good until the end of May anyway. I got my hair cut at Bubbles, and I can’t say I was super thrilled with the results. I feel like way more than my requested inch was taken off, and the layers are pretty drastic…but it is growing on me and I’m actually starting to like it a bit. After my haircut, I went to H&M and picked up a couple basic shirts (one which I was hoping would be a gym shirt, but its way to tight on me so I don’t know what I’ll use it for now). I also got a belt and a crappy $3 bracelet that broke when I got home X( Then I headed to Starbucks to grab a skinny vanilla latte (first time trying it…it was pretty delish) and snagged a free “Petite” with it. I chose a lemon square, which wasn’t as great as I was expecting. Should have probably gotten the cake pop.

After that I headed over to Lush and picked up a tub of Dream Cream and a Godiva shampoo bar.

I love Dream Cream and its been forever since I’ve had some (I ran out a couple years ago and haven’t picked up a new tub since). I tried the shampoo bar yesterday and my hair is superrr soft, so that was a good purchase as well. On the bus on the way back, some crazy Jesus woman got on and sat next to me. I already wasn’t in a great mood and just wanted some peace and quiet (the bus was fairly empty…she could’ve picked literally anywhere else to sit) but instead I got to hear her yelling in my ear for 20 minutes about how we’re all going to hell (and other such pleasantries).
Note to Self: Do Not Forget I-Pod When Taking Public Transportation Ever Again.

Luckily, yesterday wasn’t all that bad. I totally forgot to change my clock forward an hour for Daylight Savings on Saturday night, though. When I woke up (at 9:30, which was actually 10:30), my clock and phone were saying one time and my computer was saying another time…confusion ensued! I did manage to get a fairly good workout in and cleaned up the apartment pretty well. In an effort to improve my oral hygiene, I also picked up some mouthwash and flossies from Rite Aid. We shall see how long this lasts before laziness kicks in (approx. 3 days) :p According to Weather.com, its supposed to go up to 70 this Friday…which is awesome. I don’t have plans for Saint Paddy’s Day (I never really do anything) but maybe I’ll do something this time if I’m not too tired at the end of the day.