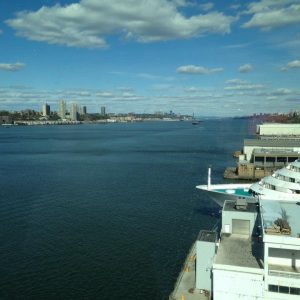 I’m baaack! (well, I’ve been back for 3 days but you know, I’m a blogging procrastinator)

The cruise on the NCL Breakaway was amazing. I got to see and do so much!

Day 1: New York
My dad drove us to the Manhattan Cruise Terminal. Luckily the ship was set for a 3PM embarkation so we didn’t have to wake up ungodly early or anything. There was a bit of a line at the security checkpoints because of computer issues, but once we got through that all was good. We found our cabin (which I found surprisingly spacious even though it was probably very small) and went to check out the buffet on deck 15. The buffet was a bit of a madhouse but had lots of options! We had dinner in one of the complimentary restaurants which was surprisingly nice (both the food and atmosphere). That night, we went to the comedy club for a Howl At the Moon show. Lots of fun…I love pianos! There’s actually a Howl At The Moon that opened in Philly but I have yet to check it out.

Day 2: At Sea
This day was spent at sea on our way to Florida. I can’t remember exactly how we spent the day, but we did attend a shopping presentation in the ship’s theater about the best deals for when we go to the Bahamas. I’m sure we did some other stuff but I can’t remember. At night, we went to the dinner show for Cirque du Soliel! I had never been to a Cirque show before so it was awesome! After that show, we saw a comedy show by the Second City which was pretty funny.

Day 3: Orlando, FL – Universal Islands of Adventure
On Tuesday we reached Port Canaveral in Florida. We took a bus to Orlando to go to Universal’s Islands of Adventure. The whole process for organizing the cruisers into different groups for different theme parks was a bit chaotic, but luckily we made it on to the right bus. Islands of Adventure was awesome! We went to the Wizarding World of Harry Potter (I had butterbeer and it is delicious!), Jurassic Park, and the Dr. Seuss world. Didn’t go on to many rides due to the long wait times, but the Harry Potter quidditch ride was definitely my favorite (though it made the bf a little motion sick). We got back around 8PM and were pretty pooped but decided to see a comedy magic show because why not! It was funny and definitely well worth it. 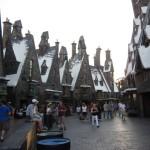 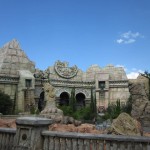 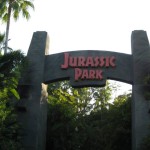 Day 4: At Sea?
This day was a slight disappointment. It was supposed to be our beach day at NCL’s private island in the Bahamas. Unfortunately due to some heavy tides, we were unable to dock there (the tender boats that would transfer us to the island wouldn’t be suitable with the tides) so it was an unexpected sea day. I was a bit mopey but we still ended up doing some stuff. We had dinner at The Manhatten, which was a complimentary restaurant but really nice with a dance floor and live band. That night we went to the Ice Bar which is basically a large freezer (with a bar) and lots of ice sculptures! They give you parkas and gloves since its kept at -17 degrees and you also get 2 vouchers for drinks which are in glasses made of ice as well. It was freeeeezing but a really cool (no pun intended) experience!

Day 5: Nassau, Bahamas (and Halloween!)
This was a packed day that definitely made up for the lack of activity from the previous one. We arrived in Nassau (actually arrived the previous evening since we headed there earlier). After breakfast, we proceeded off the ship and up to the shopping area on Bay Street…was kind of long process walking from the dock. We checked out a few stores. I ended up buying a bamboo cotton scarf (very soft) and some rum to take back. There was a very cute Coach purse that I was interested in but I just couldn’t sacrifice spending that much haha. I also got a couple small souvenirs. There wasn’t a beach in Nassau that was accessible (you had to take a cab) but since I hadn’t gone to the beach the previous day I was not leaving the Bahamas without some beach time! We took a taxi (well, a van packed with like 9 people which would probably break like 3 different traffic violations over here) to Cabbage Beach on Paradise Island. We relaxed for a couple hours and I drank from Bahama Mama out of a coconut. It was awesome and the weather was beautiful! After that, we took the taxi/van back to the port and grabbed some dinner at the buffet. After dinner we saw Rock of Ages in the theater which was great! I’d always wanted to see that show and it was definitely worth it. The show was complimentary but I felt like I should have been paying something additional because it really was a Broadway level performance. After the show, it was time to get our costumes on and go to the Halloween party up on the top deck’s bar/club area. This is the first year I got Shawn to dress up with me. We went as a 20’s couple. His hat was a little small but we made it work haha.

Day 6: At Sea
I honestly can not remember what we did this day. Shawn got a massage in the spa in the morning and I’m pretty sure we laid around on the sundeck for awhile in the afternoon. And I attended a presentation where they showed you how to make cute animals out of bath towels! (I can make a puppy dog, but nothing more complicated than that lol). We also shopped for gifts and souvenirs. At night, there was the firework show which was basically like an hour of standing around because of some technical issue and about 10 minutes of fireworks. I don’t think we saw any shows but we did chill in the martini lounge (with martinis of course) and listen to some live piano music.

Day 7: At Sea
Our last day on the ship =( We were getting closer to NYC so the air was more cold and it was rainy actually, so no sunbathing. We just hung around the ship a bit and then had dinner at the Italian restaurant on board, La Cucina, which was very good (albeit a bit slow service). We saw the only show we hadn’t seen yet which was Burn The Floor, a dancing show. It was really good! A lot better than I was expecting. The theater was also packed since it was the last show of the cruise. Then we packed up all our stuff.

Day 8 isn’t really worth its own section. Basically left the ship around 8AM in NY and took 2 trains to get back to Philly. I really miss the cruise but I’m very happy to be seeing this little guy’s face again!