I suck at this blogging thing! =p Been meaning to get this post up for a week, and just getting around to it.

I first heard of the concept of cauliflower mashed “potatoes” from a youtube video. Now…I’m pretty non-picky when it comes to veggies for the most part. The only veggie that I really dislike would have to be cauliflower, so I can’t say that this was a recipe I jumped on making. However, after reading a lot of comments where people said that it tasted so much like mashed potatoes and that its great for people who hate cauliflower, I figured why not? I mean…it even looks like potatoes! The ingredients I used are below, but you can customize it however you’d like (just like you would for mashed potatoes): 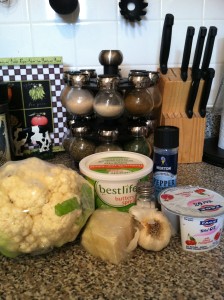 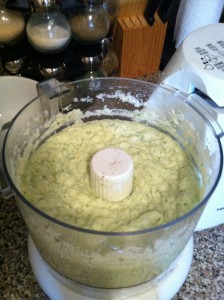 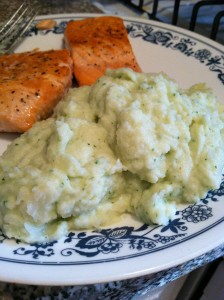 First, boil or steam your cauliflower so its very very soft. I boiled mine for close to 10 minutes. I used a food processor to make this which is probably the easiest, but I’m sure a potato masher would work just as well (just make sure the cauliflower is super soft). Put everything into a food processor and blend until mashed. I was having a bit of difficultly getting all the cauliflower pieces to mash thoroughly, so I added 1/4 cup of almond milk to facilitate the blending which worked well. I threw in some fresh parsley just to give it some color. Chives would work really well too!

And um…this tastes amazing. It tastes like mashed potatoes! And the best part is since its much more low-cal than potatoes, you can eat a ton of it. I ate half of this batch at once! haha. This is definitely going to be a staple once a week in my dinners as a potato-replacement =)