Some more reviews on goodies from BzzAgent to share with you! I’ll be reviewing two products, actually, since I recieved them at the same time and they are from the same company and can be used together. 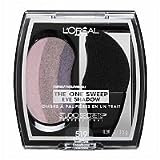 The first is “The One Sweep” Eye Shadow palette from L’Oreal. The one I recieved was for brown eyes (I must have told them in a survey at some point what my eye color was). Looking at the website, it appears there are different shades tailored to eye-color, as well as a choice within that eye-color between “playful” (a more bold look) and “natural” (a neutral look). The one I received was “playful” and the three colors it contained were a light shimmery pink, a neutral taupe, and a deep purple.  I was really happy with the color choice because those happen to be my three favorite eyeshadow colors! The idea behind this shadow is that you only need “one sweep” to achieve the liner/base/highlight look. Its actually a really great idea, and I found the execution of it to work out fairly well. One thing, though – blending IS needed, at least a little bit. Without blending, the lines were very harsh from the three colors, especially the dark purple. After some very minimal blending, the look was perfect! Very shimmery and slightly glittery, though, so definitely not a look I would wear to the office. I would use this on nights out and such. The only difficulty I had at first was trying to figure out how to angle the brush so that the colors went in the correct parts of my lid. There are instructions on the product (and it isn’t very diffcult) but I remain extremely directionally challanged (in more ways than this lol!) and it took a while for me to master swiping it on the right side and placing it correctly on my lid, especially when it came to my left eyelid. 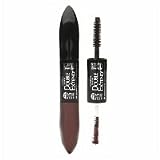 The second product I received was the “Double Extend Eye Illuminator Mascara”, also by L’Oreal. I had only just bought a new mascara a couple weeks before, so I was moreso interested in the “illuminating” aspect of this product. This mascara is double-ended (obviously). The first end being the actual mascara, and the other end being an illuminating top coat with an applicator very similar to Givenchy’s Phenomen’Eyes. The illuminating color can vary. The one I received was “black quartz” (a burgandy color), which was for brown eyes. They also have one for blue eyes, one for green eyes, and a general black one for for all eye colors. I had never tried anything like this before, and was pleased with the results. The actual mascara, to me, was good but nothing special (my Sephora Atomic Volume blows it out of the water, for sure). The illuminator, though, was pretty neat and made my eyelashes sparkle. The directions say to put it on the tips of lashes for a slight sparkley effect, and on the entire lash for a more dramatic look. I did the full lash, and for some reason I kept seeing little flickers of light out of the corner of my eyes (perhaps it was the light reflecting off the sparkles). It was slightly distracting, but actually kind of funny. I found using it only on the tips of lashes is the best option, though, because it is perfect for an everyday look since it is just a subtle sparkle. I’ve been using it on-top of my Sephora mascara for work and it looks great!

Here is a pic of my eye with both products: