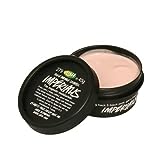 Another Lush review! This one is on the Imperialis Moisturizer (and I’ve just realized that for the life of me, I cannot seem to spell the word “moisturizer” correctly without spellcheck). I have been using Clique Dramatically Different Moisturizing Lotion since April, and I like it as well but I’ll explain later why I prefer the Imperialis so far. To give you guys some background, I would say I have combination/dry skin (this is especially true in the winter months). I haver verrry dry skin around my nose and on my chin, but very oily skin on my forehead, which is where I’m prone to acne. Yay best of both worlds, right? haha. I used to never use moisturizer (yay I spelled it right without spellcheck!) but I realized I needed some after going on medication that made my face very dry and tight. First I tried Olay (cause it was the first thing I saw at the drugstore) which wasn’t enough for my skin and disappeared an hour after I put it on. Then I used Cetaphil for awhile, which really did work and eliminated my flaky-ness, until one day it just stopped working. Meh. So then I decided to invest in a good moisturizer and get the Clinque, which I’ve been using for six months. I’ve liked the Clinque, and it did help reduce my flaky skin but mostly in the summertime. In the winter it was still a struggle with the dry skin. So now I’ve decided to go with a Lush moisturizer, since the rest of my skincare routine is from Lush (cleanser, mask, toner), so why not the moisturizer as well? Lush has a TON of moisturizers to choose from (and a ton of price ranges as well) Right now, Imperialis costs $21.35 on the Lush website, which was a couple bucks cheaper then the Clinque so thats a plus right there! I choose Imperialis because it was supposed to be for combination skin. I’ve been using it for a couple days and and really like it! The main thing I noticed was how un-greasy it made my skin feel and look. After using the Clinque, I would usually have to put on a powder over top of it if I were going to go out because my face would be so shiny. With Imperialis, my face looked matte after I put on the moisturizer and also felt very soft instead of greasy. The consistency of it is a lot thinner than I was expecting, but I find that it helps it to smooth on better. Most importantly, I’ve noticed that it has kept my flakes at bay so far. Of course, the true test will come when the cold weather hits, so perhaps I will do an update! But so far, I really am enjoying it. Hopefully it will continue to work for me unlike so many of the products I use that work at first but then stop =/

ETA: As of 1/6/09 this moisturizer is skill working great for my skin! My skin has been getting more flaky but its probably cause of the cold weather. Once the moisturizer is on its usually able to stop the flakes.