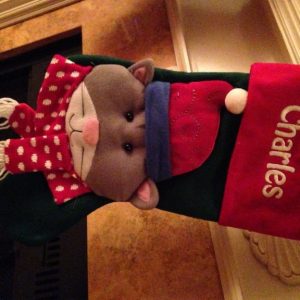 Hope everyone had a nice Thanksgiving. Vacation felt way too short, but it always does. I went over to my parent’s house and we had Thanksgiving dinner with my mom’s friends and their baby (too cute!). I made some stuffing and a butternut squash soup. First time making both but luckily they were delicious and a big hit with everyone.

The Thanksgiving break as a whole was a bit nuts though.

Our condo building apparently decided to put out traps to catch wildlife since there had, I assume, been complaints about animals getting into pipes or something. So they put out this large trap sometime on Wednesday directly outside our window. On Thursday morning, we noticed a raccoon in it. These are live traps so the raccoon isn’t dead or injured, just inside of a cage and clearly freaking out. Called the management office and obviously no one answered since it was a holiday. Went home for dinner, came back and saw the trap still out there the next morning with the little guy alternating between being curled up in a ball, frantically trying to get out, and weird shaking motions that looked like he was having a seizure or freezing or something. At this point I’m basically bawling my eyes out because I’m a total softy when it comes to cute animals (even though it would have probably ate my face off if it weren’t caged lol). I called the office again (no answer obviously) and sent an email. Even looked up what to do on the animal control website which basically said they’d pick it up for a “fee”. No one really gives a crap when it comes to raccoons haha. Saturday came and went, raccoon still in the cage. And at this point the neighbors next door noticed him too. Sunday came and went, still in the cage. FINALLY someone removed it on Monday. Why the effing hell would you set up a trap on the Wednesday before a long holiday weekend knowing that no one would check on it for 4+ days? I mean I get that its considered a pest and will definitely be killed anyway, and maybe I’m being irrationally emotional here, but is it too much to ask that I not have to watch an animal starve/freeze to death outside my window for several days? So appalling. What if a stray cat (of which there are a ton around our area) got caught in it and I wasn’t home to notice it? Not to mention if that raccoon had died in there (which from what I could tell, it didn’t), it would be attracting bugs and fleas and its right next to our window.

My parents got Charles a little bed for Christmas which is adorable and he absolutely loves it. Well on Saturday evening I looked in his bed and noticed that there were little particles in there that looked like rice. I thought that was kind of weird…but figured they were like parts of his claws or something that flaked off (wasn’t really sure at all). A quick Google search basically said that it was, without a doubt, tapeworm. Commence freakout mode. The following day, I went to the pet store to pick up tapeworm meds and gave that to him right away. I find it weird that I hadn’t seen any traces of tapeworm before that weekend or even after that one time (before giving him the meds). I’m still not 100% sure he has/had it, but really don’t know what else it could have been since the bed was completely clean before he went in it. Well, tapeworm means that he had ingested a flea, which means he has or had fleas at some point recently. So out I go to pick up expensive flea meds from the vet’s office. He’s been scratching a LOT lately so I thought…oh hey now I know why!. Unfortunately, he’s still continuing to scratch even after the flea meds. Guess its something else, but even so it was probably a good idea to use the flea meds on him anyway since he must have had them at some point. Wish I could figure out why he’s so itchy =(

So yea, that was my weekend. Spent till close to midnight last night buying gifts off of Birchbox.com (yay for cyber Monday). They actually have some cool gift ideas for both men and women if you’re struggling to find something. Lots of cooking and home goods type stuff.

So pretty! The red and white combo worked really nicely I think. Oh, and I can’t forget Charles’s stocking… 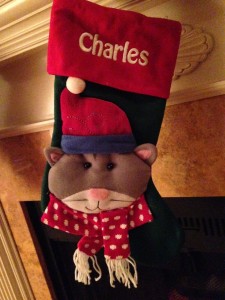