I’ve been using both of these services this week, mainly because both happened to become available to me this week. I received 20GB of free space for the Amazon Cloud Player for downloading the new Lady Gaga album on Monday. And yesterday, I finally was emailed my invite to test out Google Music, which is still in beta. Since I’ve gotten about the same level of usage out of them both, I decided to do a little first impressions comparison between them. Hopefully you’ll find it helpful if you’re thinking about using a cloud drive to stream your music. 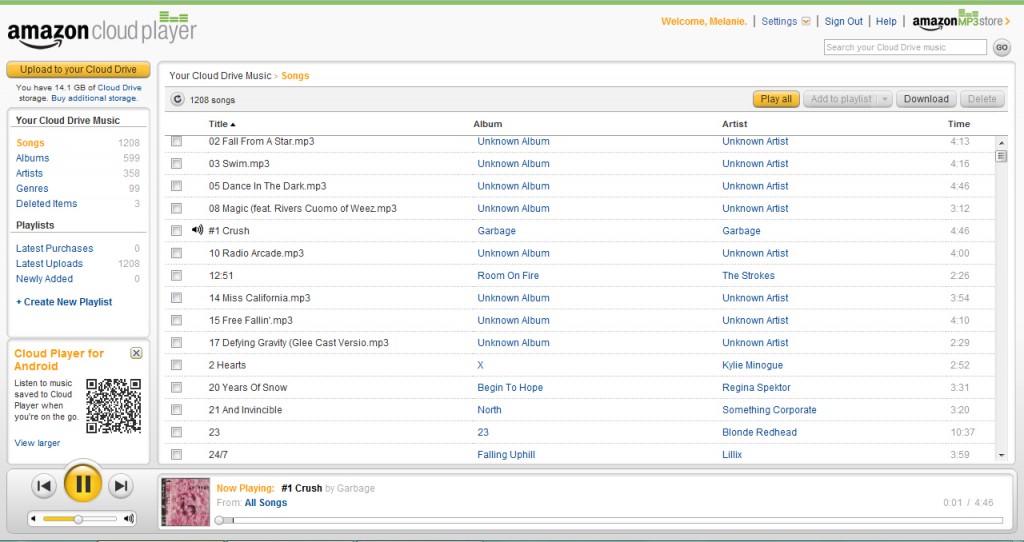 This player was pretty simple to set up. You need to install the Music Uploader to be able to upload your music, but this does not take long. The upload time was also fairly fast as well. You choose which folder or folders you want Amazon to pull the music from, and it does it. I also like how it is integrated with Amazon mp3 to purchase music because its where I purchase most of my music from now. A few things I did NOT like about the Amazon Cloud Player – You had to chose from folders, which is not that accurate with what I actually have in my I-tunes player. There are lots of songs that I have saved in the folders that I don’t listen to and are not in my I-Tunes player, and they were pulled in as well. If you have music in any other folder on your computer besides the main Itunes one, you have to remember to pull that in too…I had to with my Amazon mp3 music because they weren’t in my usual I-Tunes folders. As you can see if you expand the thumbnail above, a ton of songs were pulled in as “Untitled” or with the numbers still in front of them. I spend a lot of time making sure my music is organized in my I-Tunes player, so when stuff like that happens it drives me nuts. I’m also not sure that it actually pulled in all my music, as the song count from I-Tunes vs. the Amazon Player is about 1k lower. The playback was fine was far as the music goes, but another thing that bugged me was when I was scrolling down fast to get to a certain artist/song, the screen would go white and I’d have to wait for it to “catch up”, if you will. Overall, I didn’t really like it after using it…mainly because of the importing options and the scrolling issue. If this were the only option, though, I’d say go for it. 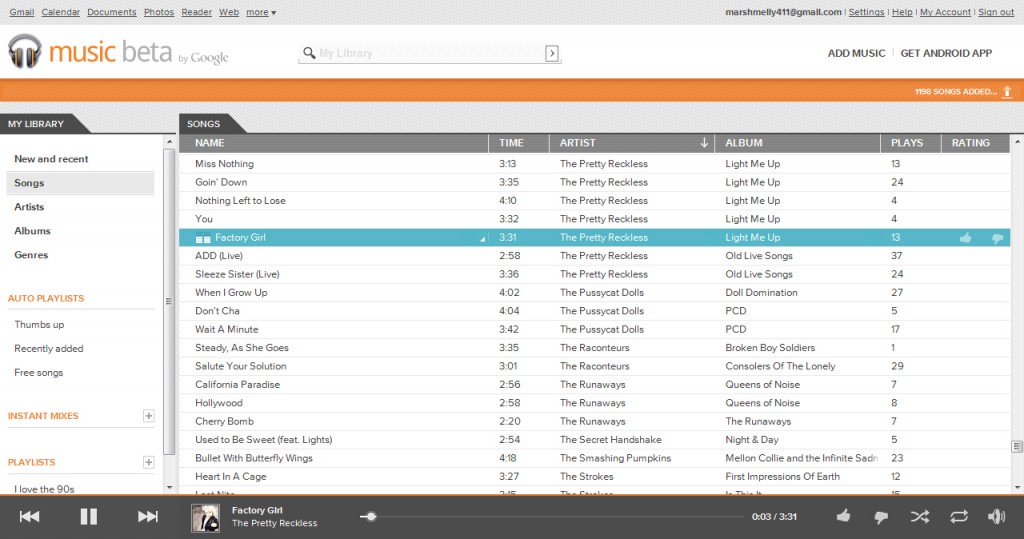 I was pretty excited when I recieved the invite to try this, mainly because I knew I could compare it to the Amazon version. Same sort of deal…you need to install the “Music Manager” to upload your songs to Google. But I was veryy pleased to find that there was an option that let you chose only from music that is in your I-Tunes Player. You can also chose from Windows Media Player as well as folders (which I also did for some). I also really prefer the user interface of Google’s as opposed to Amazon’s – it seems more vibrant. It did pull in a few files that it listed as “Various Artists” despite it being labeled correctly in I-Tunes, but they weren’t too many. The main gripe I have with Google Music is that it isn’t pulling in all my songs either (I’m not sure why neither of these players is doing that). It seemed to have pulled in the same number of songs as the Amazon player, so I’m starting to think there some issue going on when its imported…I don’t know. Another thing is that sometimes if I’m updating a song’s info, it won’t apply until I’ve refreshed the player. Not a huge deal, but probably a minor bug that Google would fix before an actual release. The playback with this player is also good…nothing much to say regarding that.

Overall, I like Google Music much better than Amazon Cloud Player, although both are fairly comparable services. I think if Amazon added the ability to upload from just the I-Tunes player, that would have made a big difference. For now, I’ll continue using Google Music to see how it develops and if any improvements are made. I’ve been using it all nice so far and I’m definitely liking it.