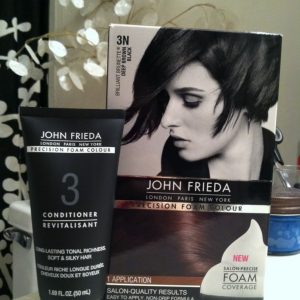 This is the second boxed dye that I have tried from the drugstore (Clairol Natural Instincts being the first), and I have to say I am super impressed! After using the Clairol, my grays were pretty much completely back after 7 weeks (I have therefore adjusted my original rating of it) so I started looking into another dye to purchase. I decided to go for permanent this time instead of semi-permanent. I had been wanting to try the John Frieda one for awhile, and found out that they added a bunch of new shades since the last time I checked their website.

The price of this dye is a little higher than most. It was about $13, where most dyes are between $5 – $8 I would say. I purchased the shade “3N – Dark Brown-Black”, since that would most closely match my hair color. This dye is a foam (much like Clairol’s Nice N’ Easy Foam), so its super easy to apply which is a huge plus. When mixing it, you don’t shake the tube but instead gently tilt it 5 times. Shaking it or tilting too much causes the foam to be runny. Applying this foam was a breeze. I still put down some newspapers but I probably didn’t need to. The gloves they include are really nice as well and much more high-quality than other rubber gloves I’ve used. I did have a problem with getting the foam to lather as much as I thought it should have (the picture in the directions shows a huge white lather on the model, mine was not like that at all). That didn’t seem to really matter much though…I did manage to coat all of my hair, concentrating on the gray parts the most. I had just enough dye to saturate my hair, which is pretty long. If you have hair shorter than mine you’ll have plenty of dye for your hair, if you have super long or very thick hair you might have to purchase two boxes. As for the smell, it smells exactly like Sally Hansen Bleach, which is a really random thing to compare it too…but having used that bleach for years I recognized the smell immediately. Its not a bad smell, imho, but it smells exactly like it. After applying, I waited 30 minutes and then rinsed (using the conditioner they provided).

I was pleasantly surprised with the color, which leaned more towards black than brown. I prefer black over brown (which probably means I should just dye it black, but I’m always too scared to), but I could understand being upset with the results if you were expecting it to lean more on the brown side. I’m assuming that it’ll fade to the advertised color, though. In addition to the color, I was amazed at the texture and softness of my hair. The Clairol I had used previously made my hair feel drier. This dye, however, made it feel so soft and much healthier than before I had used it! It may have been the conditioner included, which is absolutely amazing and I wish they sold it separately because I would totally buy a gallon of it. It also covered my grays.

This dye by John Frieda has everything I want. Easy to apply, amazing color, and makes my hair super soft and shiny instead of dry. I wish it were slightly cheaper but its definitely worth every penny. I’ll update on if it fades, but I’m hoping it will last longer than the Clairol did.

Have you ever tried John Frieda Precision Foam? What were your thoughts?

Want to Win a Custom Header for your Blog? Enter my giveaway here! Ends on February 29th.
Google Friend Connect Followers: Please subscribe to my posts through any of these methods as Google Friend Connect will be discontinuing service for blogs not hosted on Blogger or Blogspot as of March 1st.