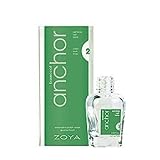 I picked up this base coat with my most recent order from Zoya along with the Get Even Ridge Filling Base Coat and the Remove Plus Polish Remover. I hadn’t been a big user of base coats previously. The only one I had was a very thick base coat by Sally Hansen. Every time I used it, my polish would literally peel off (like in one piece) after only a few days. I thought thats how all base coats would be so I just went without it for awhile until I came across the Zoya base coats. I originally was only going to get the Ridge Filling Base Coat, but they were having a promotion where you could get both basecoats for the price of one ($8). The Anchor base coat had gotten some really great reviews, so that is the one I tried first this week.

I am seriously blown away by this base coat! I didn’t think base coats really helped much with polish wear and protection (figure that’s what a top coat is for) but this base coat has proved me wrong! Usually by the end of the week, my polish is noticeably chipped on the very tips. 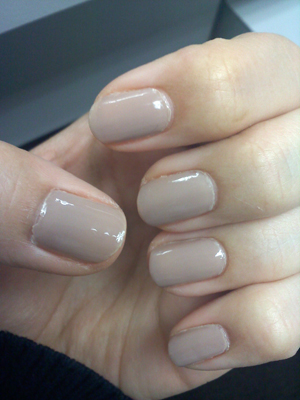 Thanks to [amazon_link id=”B0026A1B3C” target=”_blank” container=”” container_class=”” ]Seche Vite[/amazon_link], it doesn’t end up being super chipped or anything where it looks terrible, but there are still always a few little chips at the ends of the nails. Well since using this base coat, its been 5 days and I literally only have one tiny little chip that you probably couldn’t see unless you were really looking for it. The picture on the right was taken this morning which is 5 days after applying my polish. Yea…they look pretty much the same as they did on Sunday. I can’t believe it! I also don’t have that urge to peel my entire polish off like with my previous base coat. My polish feels like its really stuck on my nail (it may end up being a pain to remove, but I’ll have to see). In one of the reviews I was reading of it online, someone referred to this as “the Seche Vite of base coats”, and I think I’d have to agree with them! This in combination with Seche Vite as a top coat is the perfect combo for my nails. I am going to use it again this upcoming week with a brighter polish, so any chips I may get will be more easily noticeable than the polish I used this week…that will be the true test! 😛

If you want to pick up this base coat along with Zoya’s ridge filling base coat, you can still get both of them for $8 on Zoya’s website where they are still running the “Down to Basics” promotion. I’m not sure how long this promotion is running, but it is listed as “bi monthly” so I’m going to guess until the end of July. If you only want to get the Anchor base coat, it is actually [amazon_link id=”B004CSU8IA” target=”_blank” container=”” container_class=”” ]available on Amazon.com for $5.99[/amazon_link] with much cheaper shipping than the Zoya website.